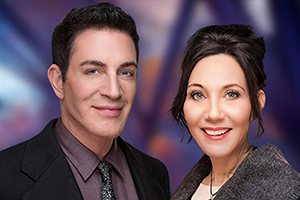 Dr. Eric Pearl and Jillian Fleer
Internationally renowned chiropractor, has participated in numerous television programs in the USA and in the rest of the world, has been invited to speak at United Nations he held a seminar in a packed house Madison Square Garden and his lectures have been published in numerous magazines, including the New York Times.
Eric practiced the profession of chiropractor for 12 years and also achieved remarkable success, until a group of his patients he claimed to have felt his hands on their bodies, even though they had not physically touched them. For a period of two months his hands were witnesses of particular sensations. His clients claimed of having had significant improvements in all areas of their lives including that of wellness. Serious problems were completely reduced or disappeared.

All of this happened when Eric simply "listened" to the energy of his customers with his hands. From that moment on, Dr. Pearl began helping his patients in this way and has given rise to a serious search supported by experiments performed by well-known universities such as the Stanford University, the University of Arizona and that of St. Petersburg about how such events could be possible.

Its incredible story is described in the book"The Reconnection, Heal Others Heal Yourself"translated into 39 languages. Eric and Los Angeles-based Reconnective Healing have attracted considerable interest from doctors and scientific researchers who work in hospitals and universities around the world, including Jackson Memorial Hospital, UCLA, Cedars- Sinai Medical Center, VA Hospital, the University of Minnesota, the Medical Institute of the University of Miami and the University of Arizona where several seminars are also held at the express request of Dr. Andrei Weil.

New research programs are currently underway on numerous activities under the supervision of eminent scientists such as Gary Schwartz PhD. and William Tiller PhD. Dr. Pearl travels all over the world, bringing with him the information and the light of Reconnective Healing.

He teaches, with the help of his International Team, how to perceive and use these frequencies new and full spectrum that are present on the planet for the first time and that allow access to an energy level that no one has ever been able to reach until now. To date Eric Pearl has taught Reconnective Healing to more than 120.000 professionals in over 60 countries, in order to give birth to a spontaneous generation of "light workers" all over the world, as he himself likes to define them.
LOOK AT THE SCIENTIFIC RESEARCH
BOOK A SESSION
LOOK AT THE SCIENTIFIC RESEARCH BOOK YOUR SESSION
PHONE:
(+39) 340 1784206 or (+41) 076 257 28 80
from the 10.00 18.00
EMAIL:
info@guglielmopoli.com

Español
We use cookies to make sure you can have the best experience on our site. If you continue to use this site, you accept our policy. AcceptRefusal